The Portsmouth EDL Youth Coach, the HAWKS and Us...

Stranger and Stranger...
Following our last investigation into the behaviour of EDL Youth Football Coach Steve Clarke we received emails from Clarke's wife pointing out that neither herself or her teenage children were responsible for the vile and insidious views posted by her husband. For this reason we decided to make the unprecedented decision to suspend our site temporarily to give Clarke the chance to put his own house  in order and apologise for his behaviour and comments.


Unlike the nasty and evil elements who run groups like the the English Defence League [EDL] and British National Party [BNP] our aim has never been to persecute or harass innocent men, women or children so we chose to give Clark a chance: we would remove the story and replace it with his apology and complete retraction of the comments he had previously made, for the sake of his wife and kids.


We did receive a vague kind of apology cloaked in the "I'm not a racist, some of my best friends are black" irony popular amongst these people. We were going to leave it at that. However, Portsmouth Evening News ran with our initial story and made in their front page story on Friday. What astonished us was Clarke's new claims that the comments he apologised to us for making...were now never made by him!!! He is claiming his account was hacked and he never made the homophobic and racist comments that he has already apologised for making!


Although he then goes on to admit "I do think that two gay people is wrong. It’s my own feeling." He clearly needs to look up the word "homophobia" in a dictionary. We also emailed Clarke encouraging him to take a Diversity course because his views really are sickening and unacceptable in this day and age.


In the front page story Clarke "strongly denies making the offensive comments about Muslims and homosexuals and says the only explanation he can think of is that his profile on the social networking website was hacked."


However, in the apology he sent Portsmouth Nazi Watch on 9th March he states "I did make comments regarding homosexuals but it was just joking between friends" and "The comment about all muslims should be gagged has been taken seriously out of context." We are unsure, as we provided an unedited screen cap of the comment, how it could be taken out of context. We even stated it was from the Facebook page of Portsmouth EDL.


Clark get's himself into even deeper hot water. Clarke told the The News "he had attended meetings of the English Defence League in Portsmouth after being invited along. But he says he stopped attending after two meetings as he believed there was squabbling within the groups and that he is not a member of the organisation."


Again this is total fiction. Clarke first came to our attention in the run-up to the EDL's demonstration in Portsmouth, in July of last year. He had made posts promoting the event, and had even posted on the wall of an unauthorised "Portsmouth FC EDL" Facebook group stating people should not join this but rather the official Portsmouth EDL group.


It strikes us as a little odd that eight months later he decides to post his comment, on 3rd February 2012, urging that "muzzies [muslims] should be gagged" on the group wall for an organisation he is claiming not to support or be a member of. But his involvement in the far-right group goes back even further than we thought!


It came as little surprise when it surfaced that Clarke was screen capped by our friends at EDLNews actually organising an EDL event himself and promoting it in January of last year!!!


We have also received Screen Caps of Clarke's comments on the social networking site from our friends at Nazis Not Welcome. Clarke 'likes' his friend's comment "burn the ragheads" :

Please note the comment by Paul Lock, leader of Southampton EDL, which ends in the neo-nazi sign off "ns" standing for "no surrender".

Clark believes "ordinary muslims" should "stay indoors"  and accept the intimidation of EDL thugs, which makes a mockery of his claim that he is "against muslim extremism, not decent 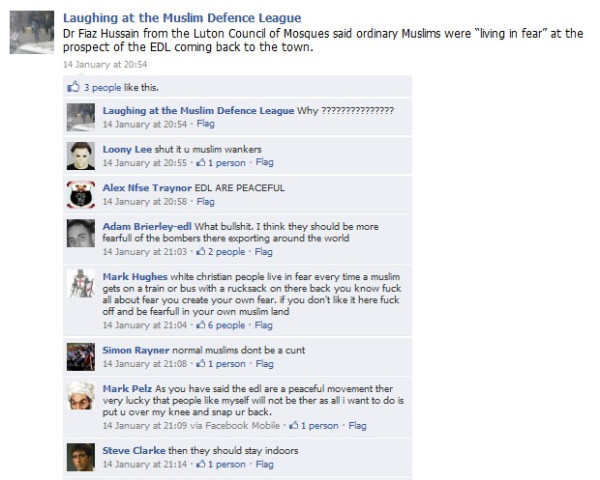 Clarke then ends his 'apology' by claiming that,
"i DO NOT preach any racist or homophobic ideology to anyone and certainly not children."

This is despite the fact the screen caps, amongst many others we have from Clarke, were all posted by himself, on his own Facebook profile (now deactivated), in full view of every single member of the Under-15s Football team, who were all on his friends list.

So, it all comes as a strange little riddle, wrapped in a mystery, inside an enigma, as to why Steve Clarke apologised for comments he now claims he never made and denies membership of a group he has actively promoted and involved with for well-over a year. We at Portsmouth Nazi watch believe someone is a lickle liar...


To the editor of Portsmouth Nazi watch:
I did make comments regarding homosexuals but it was just joking
between friends, of course i dont think all gays should be murdered,
we have a gay cousin who is due to be married very shortly, i will be
attending this wedding with my wife. We also have gay friends and i
also work with gay people. I APOLOGISE to those who have been offended
by my comments.
The comment about all muslims should be gagged has been taken
seriously out of context, i am against muslim extremism, not decent
law abiding muslims and this is the reason i attended two EDL
meetings. Some of their views i agreed with and some i didnt, i do not
know anyone on a personal basis from this group and have not attended
any more meetings. I APOLOGISE to any law abiding muslims who have
been offended by these comments. I am not a racist person, i have a
niece of ethnic origin, my best man was an African and i have friends
from many different Nationalities. Everyone who knows me personally
would agree that i am not the person this article has made me out to
be.
I have deleted my Facebook account as this has made me realise that
the internet can be a very nasty and obtrusive place with contexts
taken very seriously and the wrong way by some members of our
community. I would like to state that i DO NOT preach any racist or
homophobic ideology to anyone and certainly not children.
The racist humour of Steve Clark...

Please Note: Since our previous article was published we have been contacted by Havant & Waterlooville Football Club Ltd who would like us to make it clear that whilst the Under-15s team coached by Clarke plays under the same name it is no way, shape or form connected with the Official HAWKS Club. We are happy to publish this correction and issue an unreserved apology for any confusion caused. A spokesman for the club stated:

"The  gentleman in question is part of Havant and Waterlooville Boys Club set-up which is a completely seperate organisation from the Hawks who operate just three teams. A semi-professional Mens team in the Blue Square South, an U-19 side in the Conference Youth League and a Ladies team.
"We do not wish to be associated with the article which undoubtedly relies heavily on the insinuation that it is the Hawks who employ this moron. The Club runs a successful "Hawks in the Community" scheme which is completely non-discriminatory...My club has been embarrassed by this insinuation that his team is part of my club and would ask that you make clear that the Boys Club is a completely separate organisation who we have no control over whatsoever. They use our name but do not even play in our colours."
Posted by Portsmouth Nazi Watch at 08:42